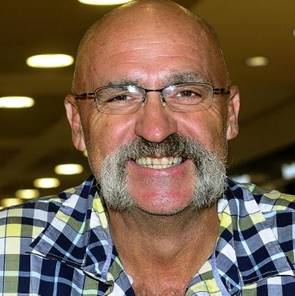 Merv Hughes was a big-hearted fast bowler who ultimately made a major contribution to Australia’s fortunes. A crowd favourite, he was a lively character armed with an imposing run-up and delivery action, a classic fast bowlers’ glare down the pitch, a mischievous sense of humour and a moustache of incredible proportions. And while his antics sometimes overshadowed his bowling, Hughes gave every ounce of effort to his country, and helped it to re-climb the ranks of Test cricket. Hughes made a comparatively modest entrance in the mid-1980s, but his value came to the fore against West Indies in 1988-89, when he lost pace partner Geoff Lawson to a broken jaw in the second Test. Hughes gained a hat-trick in that match, but his performance – 13 for 217 off 73.1 overs – illustrated his ability to combine the roles of spearhead and stock bowler.